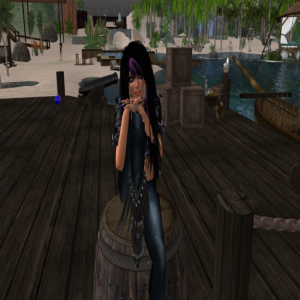 and spent the first year or so just wandering all the clubs and virtual shopping. I only wish I could replicate my SL boot collection for real!

I met Sword in 2009 and we quickly realised that we had a lot in common and enjoyed similar types of music …..mostly. Although he knows my feelings about squeaky jazz trumpets; and I accept his similar attitude towards thrash metal.

I swear there were evenings when he and his DJ pal Calvin would play the most horrible squeaky jazz just to make my eyes spin. (But don’t tell them – I used to turn my in-world volume right down and crank out a bit of Metallica from my 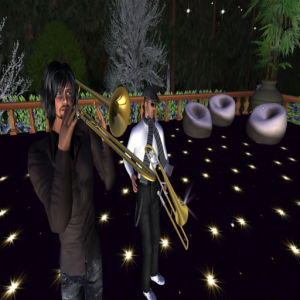 After having rented a small parcel of land where Sword was able to stream his own music, we often chatted about how nice it would be to share his vast and varied collection of tunes with our friends. These musings eventually led to us taking the plunge and building a small club. I’m guessing this is how a lot of the little clubs in SL start – and that’s why they are so great. Everyone knows that you will never get rich from being a club owner in Second Life, so as long as you are doing it for the love of the music and to share it with friends, you can’t go wrong.

At this point, I must give credit to an amazing SL light DJ, Alyx Heron. It was the shows that she and DJ Calvin Hapmouche used to run, that really inspired me to start creating sets. Alyx produces the most incredible and stunning light effects to compliment the outstanding musical sets that Calvin would play. Letting the music wash over you as swirling lights and sparkles surround you is not like anything I can properly describe. I would heartily recommend that if you are in-world, try to find Alyx Heron and join her group, “The Light Fantastic”.

So in October 2010, Club Mirage was born. The club house itself was my first real build and a lot of it was more assembly and modifications of pre-bought stuff. It certainly has been a great learning curve for me and I’ve realised how much I enjoy building in a virtual world, where everything can be done at the touch of a button and no risk of splinters or broken nails! I even bought an outfit specially for when I was building, complete with hard hat, toolbelt and dirty smudges! Even now, my building skills are amateurish compared to some of the amazingly skilled designers and creators in-world, but even in real life, I’ve always been a big hammer and even bigger nails DIY kinda gal, so that’s how I roll 😛< 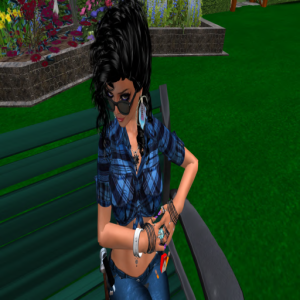 After having watched Alyx and her stunning light shows, I decided that I wasn’t just going to try and copy what she did. Even though imitation is supposed to be the sincerest form of flattery, one still likes to feel a little bit unique and special. Alyx had spent a long time developing and mastering her craft and I wasn’t going to try and compete with that. There would have been no way I would have been able to match the skill in which she produced her style of show. For me, the transition to building custom themed sets just seemed to naturally happen over time, and I realised that this was something I really loved doing. And although I have been known to throw the odd handful of fairy dust into the air, or swirl a few particles for effect, Alyx will always be the light effect queen in SL 🙂

In between building sets, Sword and I would spend a few evenings running through the set list of music, just to make sure everything ran smoothly. It was always fun, but just sometimes, it got too tiring and I’d have to have a little nap….

We initially started off with a couple of shows a week – one being just an informal gathering in the smokey little ‘jazz cafe’ room, and the second being a slightly more elaborate evening on the upper terrace overlooking the garden. I will always have fond memories of those evenings as they were our first forays into having a club and providing a fun evening of entertainment for our friends.

After a short time, Sword and I started to develop our shows to be very specific themed events. I would build a brand new and unique custom set every two weeks, based around whatever musical theme we had decided on for that particular show. These shows became surprisingly popular and we have had many requests to replay them over time, so this will probably be something that will pop up on the Events calendar now and then. You can see photos and stories about these shows on the Past Shows page. It was a wonderful excuse to get new outfits for each new show and I particularly loved it when we could go all out and really dress up. We’re looking forward to running some of the old themed events again in the future, so keep an eye out in the Events section, as well as for in-world notices and forum Events calenders.

I’m rather proud to say that – to my knowledge – there was no other venue or group in SL that did exactly what we did, and produce a completely unique and different show every two weeks. It may not be much of a life achievement but it makes me happy 🙂

As in real life, it can be quite easy to be drawn into virtual life drama, and before you know it, it has taken over what precious in-world time you have. SL is such an amazing place, where you can do, quite literally – anything. There is enough strife and worry in real life without getting sucked into it anywhere else. Remember to enjoy your Second Life. It’s a blessing to have the opportunity to live out your inner fantasies and be whoever or whatever you want to be. Have fun. Life is too short to be serious…..

Be groovy to each other,